An online journal of culture

Turtles All the Way Down

Turtles All the Way Down

By Kimberlee A. Cloutier-Blazzard, contributing writer

“We called him Tortoise because he taught us,” said the Mock Turtle angrily, “Really you are very dull!”

What can one learn from the tortoise and turtle? A lot it seems.

In the Western tradition, we all know of Aesop’s fable of the tortoise and the hare wherein “slow and steady wins the race”— a particularly relevant message in our harried, digital age. Of course, many of you will also remember that Dr. Seuss marshalled “Yertle-dogma” as a means to warn generations against the dangers of fascism and g 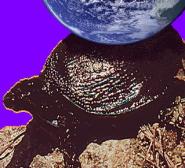 In Hindu belief, the tortoise is nothing less than the foundation of the universe. In one Vedic myth, a great flood regularly occurs every four billion years and completely dissolves the earth. The god Vishnu then returns as his second avatar (or, earthly incarnation), the tortoise Kurma. On his back rests Mandara Mountain (the eastern mountain of the four buttresses of the World Mountain/Mt. Meru); it serves as the gods’ churning rod to remake the earth from the sea of milk. In another Hindu story, the tortoise Chukwa serves as the underlying foundation for the “elephant-Atlas”, Maha-pudma.

Some Westerners have embraced this Eastern metaphor in their writings. To the catholic mind of the philosopher Wilfrid Sellars, such mythic turtles and elephants support what he called “the edifice of empirical knowledge.” (Empiricism and the Philosophy of Mind, 1956) Three decades later, Joseph Campbell remarked that most of humanity remained confounded by the implicit profundity of our own experience. Using a Polynesian saying, Campbell stated that we paradoxically find ourselves “standing on a whale, fishing for minnows.” In other words, in our stubborn shortsightedness we still cannot see the cosmic turtle beneath our feet.

Contrary to what you might expect, even sober empiricists and scientists have co-opted the tortoise-tale. The story has been recounted by various notable public figures like Stephen Hawking, Bertrand Russell, H.D. Thoreau and even Justice Antonin Scalia of the U.S. Supreme Court. Instead of inspiring romantic wonder in them, however, the metaphysical story functions as a useful anecdote that pits naïve, subjective belief against rigorous, cerebral objectivity. From Stephen Hawking’s A Brief History of Time (1988):

A well-known scientist (some say it was the philosopher Bertrand Russell) once gave a public lecture on astronomy. He described how the Earth orbits around the sun and how the sun, in turn, orbits around the centre of a vast collection of stars called our galaxy.

At the end of the lecture, a little old lady at the back of the room got up and said: “What you have told us is rubbish. The world is really a flat plate supported on the back of a giant tortoise.”

The scientist gave a superior smile before replying, “What is the tortoise standing on?”

Unfazed by the as yet unsolved mystery of the infinite regression of the universe, some literal-minded scientists like Stephen Hawking (and Richard Dawkins) dismiss their factual ignorance as just a temporary setback. For them, someday science will solve what we currently file under “mystery.” On that great day, the “patently ridiculous,” poetic turtle metaphor will fade away like the rest of humankind’s childish myths. It’s just a matter of time and the scientific method, and they never lose a night’s sleep over it.

These literal-minded scientists are close relatives to the “systems analysts” denounced by the Harvard theologian Harvey Cox in his book The Feast of Fools (1969). The two are philosophical bedfellows in the sense that they both rely overly on feasibility in their work. In Cox’s words, such figures limit themselves to “resources now in hand or foreseen” and, to the great detriment of society, “[this] discourages our hoping or aspiring toward something that flunks the feasibility test. This limits the sweep of human planning, political action, and cultural innovation.” (Feast of Fools, 85) I would add that they both work to extinguish our myths.

Paradoxically, on the other end of the philosophical spectrum from the literalists, unorthodox scientists, theologians and moralists creatively use the very same infinite-cosmos metaphor to bolster the opposite tack. For them, some cases the infinite regression story have become a means to legitimize “intelligent design” or creationism, thereby meta-scientifically solving (in an uncomfortable marriage of religion, philosophy and science) the question, “If God created the universe, what created God?”

These intrepid scholars and theologians might find the romantic “Turtles All the Way Down” myth as a useful metaphor to give perspective to history and to elucidate why demythologization is itself a myth—Positivism’s “myth of a mythless humanity.” As Belden C. Lane wrote, “[Demythologization’s] very insistence and repetitiveness in our cultural history, from Xenophanes to Voltaire, shows us to be incurable storytellers, molded by the power of myth.” (“The Power of Myth: Lessons from Joseph Campbell,” The Christian Century, July 5-12, 1989)

As the recent heated debate about atheism and “the death of God” in both mainstream media and on the Web has illustrated, perhaps humankind is already busy defining its next great pluralistic mythology. This is an idea that Cox has been suggesting since the mid-Sixties. In his books The Secular City (1965) and the aforementioned Feast of Fools (1969), Cox hints that that a new spiritual mode might result from the synthesis of the salvageable parts of traditional religion and a new infusion of festivity and fantasy. In his vision, the uniquely human endeavors of festivity and fantasy could eradicate “crippling literalism,” the incapacitating fault he sees as the central attribute of both fanatical Atheism and Fundamentalism.

As Cox has postulated in various arenas, any novel ecumenical mythology will likely embrace a new language about divinity. I would argue that it might be similar to a new mythic language which Campbell prophesied will “identify the individual not with his local group but with the planet.” Cox further suggests that the universal, humanistic call to fight against poverty and social and environmental injustice might supply the substrate for the Post-Modern common cause.

Though it has been decades since Cox’s first recognition of the rising of the tide, this overdue development remains embryonic and amorphous. It does exist, however. With the recent trifecta of Al Gore’s worldwide environmentalist caché, John Edwards’ recalcitrant anti-poverty election platform, and the Republicans’ hesitant turn towards the political center, we may be getting a taste of the savory dialogue to come. We will just have to wait; only time will tell.

The turtle would be a great symbol for such a mythology. In Chinese tradition (as in Hinduism) the turtle bridges the divide between heaven and earth; its rounded upper shell represents the heavens, and its square lower shell represents the earth, both spheres inseparably tied together by its middle being. Indeed, whether we hail from the Western or Eastern tradition, just as the turtle cannot shed its shell, neither can we humans dislocate ourselves either from the infinite universe or from the earth. This is an important lesson, for although we can travel great distances in the mind (via science and philosophy), in the end we must always recognize a return to our nurturing, starting place in the world. (As one Baroque Dutch emblem of the turtle proclaims, “East, west, home is best.”)

With luck, the cosmic renewal is already underway, the butter churning begun.

Rise up, my love, my fair one, and come away.
For, lo, the winter is past, the rain is over and gone;
The flowers appear on the earth;
the time of the singing of birds is come,
and the voice of the turtle is heard in our land.

________________
Kimberlee A. Cloutier-Blazzard, Ph. D., is an Independent Scholar of Art History, Specializing in Northern Renaissance and Baroque. Click here to send her email.

• If you enjoyed “Turtles All the Way Down,” you may also be interested in these previous articles from Bread and Circus on-line magazine–